NOTE: Mr. Williams' opinion does not
necessarily reflect that of The OTHER PAPER.

[NOTE: I have broken this up into pages.
There are four, at present, with more to come,
including photos. More NEW material as of 8-4-97. HW]

The  piece below is exactly as submitted, with two minor corrections of fact:  1000 years rather than 2000, and the deletion of the oft-times soberly reported-and-repeated New Age Urban Myth of the "visit to Hopi of the Dalai Lama" and "joint statement" finding themselves to be long-lost brethren, which has never occurred! But I had to go to Hopiland to learn that. 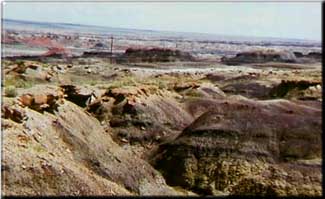 NOTE: I have made minor alterations for the TUTUVENI version, to correct two small factual errors which appeared in the T.O.P. version. All copy in RED has been added since publication.

Consider for a moment the constellation we call the Big Dipper; now look in from the very end of the handle, towards the 'dipper' itself. There, you see? It is not merely a single star, but a double, about which planetariums delight in telling us "the Plains Indians called this star 'Horse and Rider.' " Well, before the coming of the White Man and the horse, they sure didn't. And, when you look at it in a telescope, it resolves into a triple star.

The 'Hopi-Navajo Land Dispute' is much like that star. The harder you look, the less certain one becomes of the absolute truth of the situation. Even the names are suspect, at times. But it is well to begin with one unassailable fact: the Hopi have occupied the lands they now inhabit for at least one thousand years. There is evidence that the figure (for their antecedents) is closer to ten thousand years, but one thousand is accepted without controversy.

The Roots of the Controversy

Old Oraibi, on the First Mesa, is the oldest continuously inhabited settlement in the U.S. lower 48, and was founded about 1050 a.d. The Hopi culture infuses dry farming and daily life with a sophisticated and all-encompassing religious observance that is paralleled, perhaps, only in Tibetan culture. Religion, daily life and land are considered inseparable.

The name "Hopi" means the "peaceful (or "virtuous") ones."

On the other hand, the term "Navajo" is a modern misnomer. The Navajo call themselves the "D'ineh." The Apache call themselves the "T'ineh." The generalized "tribes" were actually hunter/gatherer nomads, usually small clans and family groups, who arrived in the region about the same time as the Spanish, in the 15th or 16th centuries. Raiding immobile farming communities of the Pueblo Indians and the Hopis was a common enough occurrence that the history of the region is rife with requests to Spanish, Mexican and U.S. officials for protection. In 1863, Colonel Kit Carson was ordered to "round up" the groups, and the Navajo were cruelly imprisoned at Bosque Redondo, which is the beginning of the modern history of the D'ineh.

The Hopi, having never gone to war with the U.S. were thus never granted a treaty, and, in 1882, President Chester Arthur created the Hopi reservation, with the proviso that the reservation was also for "such other Indians as the Secretary of the Interior may see fit to settle thereon." Those "other Indians" were the present-day Navajo.

Two more unlikely cultures have rarely been mistaken for one another -- but "injuns is injuns" seemed to fuel the thinking in Washington D.C., and the Navajo, released from Bosque Redondo, and now herding dubiously acquired Spanish Merino sheep, increasingly encroached upon traditional Hopi lands. All Navajo land holdings were acquired during the last 150 years.

The loss of traditional Hopi lands was staggering. In his Master's Thesis abstract, William Havens, who now works for the Hopi Nation, relates: "the Navajo Nation grew from 3.5 million acres in 1868 to over 16 million acres, while their neighbors, the Hopis, have lost over 40% of their original reservation land."

"The Hopi Tribe, on behalf of the Hopi people, is only acting to regain jurisdiction of Hopi land. The real issue is reclaiming land restored to the Hopi people in the 1974 Land Settlement Act."

As any western cattleman can tell you, sheep are ravenous eaters of range land. The land of the reservations is marginal land, and the Hopi reservation itself reminds one eerily of the panhandle of Nebraska, with yellowed grasses barely covering tablelands and plains. It is desolate near-desert. And, into that near-desert, unfenced and untrammeled, Navajo sheep poured forth, trampling ancient Hopi holy sites and potsherds: "We used to rescue the shards in the sheep camp roads on the Navajo area," wrote former Chicago SUN-TIMES reporter Cynthia Dagnal-Myron in the Arizona DAILY STAR in 1994. "People were dumping garbage and driving over them. Grinding history to dust. Covering it over with filth." Dagnal-Myron was then married to a Hopi, and worked for the Hopi Nation for a time.

"In the early 1940s, the Secretary of the Interior established twenty-one grazing management districts ... in an effort to control livestock and improve range management and soil conservation. Of these grazing districts only District Six, located in the south-central portion of the 1882 reservation was identified as an exclusively Hopi district. All of the remaining districts were assigned to the Navajo Nation. The establishment of these districts significantly intensified the disputes, with the Hopi tribe vigorously protesting the establishment of District Six."
[U.S. Senate Calendar No. 582, Report 104-363. 104th Congress, 2nd Session, 1996.]

A law was passed by Congress in 1958 to allow the Hopi to sue the Navajo Nation in federal court. Since then, "This controversy has generated more than 35 years of continuous legal battles involving the tribes and the United States."
[ibid.]

In 1974, after several years of "joint use" land disputes, Congress passed the "Navajo and Hopi Indian Land Settlement Act." In drawing the "line" between Hopi and Navajo areas, a few Hopi and Navajo families found themselves on the wrong side of the fence--literally, erected by the Bureau of Indian Affairs.

Thus began the last twenty-three years of protest and publicity by groups representing themselves as "traditional Navajo elders" being thrown from their "ancestral" lands by the "genocidal" Hopi.

Negotiating in good faith, the Hopi Tribal Council ultimately concluded the current agreement, which allows new land to families to be relocated, and free construction of new housing BEFORE relocation. To Navajo families who sign the "Accommodation Agreement," 75-year leases were offered, providing that the Navajo agreed to abide by Hopi law on Hopi lands.

As of March 31, 1997, "62 full-time residents of the HPL [Hopi Partitioned Lands] out of a total of 73 full-time home sites signed ..." [George Joe, of the Navajo-Hopi Land Commission Office; posted on NATIVE-L, a scholarly Native American discussion group on the Internet. Joe is a Navajo.]. Protests by splinter factions continue unabated, even though the Navajo Tribal Council has accepted the resolution. [Note: the NTC has, since, flip-flopped and rejected the resolution. HW].

Meantime, as confirmed independently by Dagnal-Myron in conversation with this reporter, Havens notes: "The most radical group ["Sovereign Dineh Nation," this Spring renamed to "Dineh Support House" HW] works out of an office in Flagstaff largely staffed by non-Indians looking for a cause." The rhetoric of "torture" and "genocide" worries several observers, who fear that European and U.S. radicals will descend on Arizona to violently confront the Hopi.

While "non-violence" training has been promised by some groups, its effectiveness is viewed as questionable. Several calls have gone out over the Internet for money and bodies.

Space does not permit discussion of the "puppet Tribal Councils," renegade Hopi "elders," or the Peabody Coal Company's strip-mining of Black Mesa, but these are, truly, side-issues thrown in with the "genocide" and "torture" rhetoric to confuse the issue, which is still: who is talking about genuine ancestral lands, and who is merely talking?

I wonder what the Plains Indians called the 'horse and rider' stars before the coming of the White Man?